A Transient Ischemic Attack abbreviated as TIA, is similar to a stroke, because it produces the same symptoms as that of a stroke. But unlike a stroke, it only lasts for a few minutes and does not cause any permanent damage. 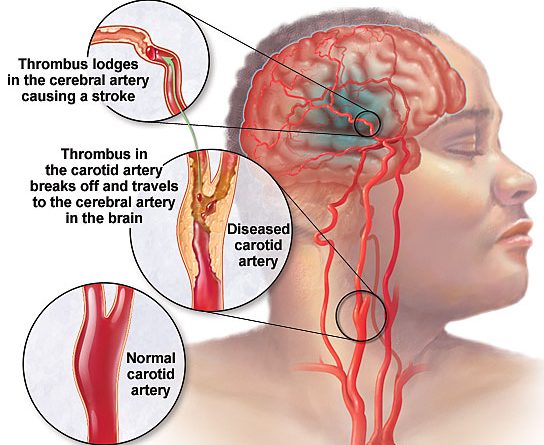 Consider the transient ischemic attack as an opportunity and a clear warning, the chances of you suffering from a stroke are very high if you do not take the necessary actions to prevent it from happening.

A TIA and ischemic stroke share the same origins. When a person suffers from ischemic stroke it is due to a clot that prevents the supply of blood to a part of your brain. In a TIA, unlike the ischemic stroke, this clot lasts for a very small duration and no permanent damage what so ever is caused.

But to be more precise, TIA is most often caused by an excess of cholesterol-rich fatty deposits, which are also known as plaques, building in any artery or a branch of artery that is responsible for sending the blood and other necessary supplies to the brain.

These deposits or build ups can eventually cause a decrease in the blood flow moving through the artery or lead to the formation of a clot. A blood clot located in the artery which is used to supply the brain with blood and nutrients from another organ of your body, mostly the heart, may also cause TIA.

There are some risk factors for the TIA that you just cannot control or change. While there are others that you can easily control.

Though you can’t change the uncontrollable and unchangeable risk factors, but knowing that you might be at risk of a transient ischemic attack or a stroke can motivate you to make amends to your current life style and health. Here are those factors:

Here are certain risk factors that you can take charge and control of. The following factors do not imply that you will most certainly suffer from a stroke. These factors merely imply that you are at a greater risk of suffering from a stroke and amends must be made sooner than later.

What to expect when you visit a doctor due to TIA

Most of the time, a TIA is treated as an emergency case in the hospital. But a doctor’s appointment can be made for a thorough check up if you are concerned about suffering from a stroke or a TIA again.

Be prepared to talk in great detail about your family history, about your health, your current life style and your previous life style with your doctor. Do not leave out any detail. Any bit of detail can be absolutely crucial in determining the current state of your health and the potential risk that it is in.

Be prepared to be prodded and pierced by needles and injections, if your doctor prescribes a test for you, you must not hesitate in taking that test as the slightest of delays can have serious consequences. Before you take the tests though, ask you doctors for clear instructions about the requirements of the test. Some test, might require that you fast before the test is taken, others might require that you increase your fluids intake. Incorrect information regarding these requirements will only lead to inaccurate test results which will subsequently lead to increased health risks.